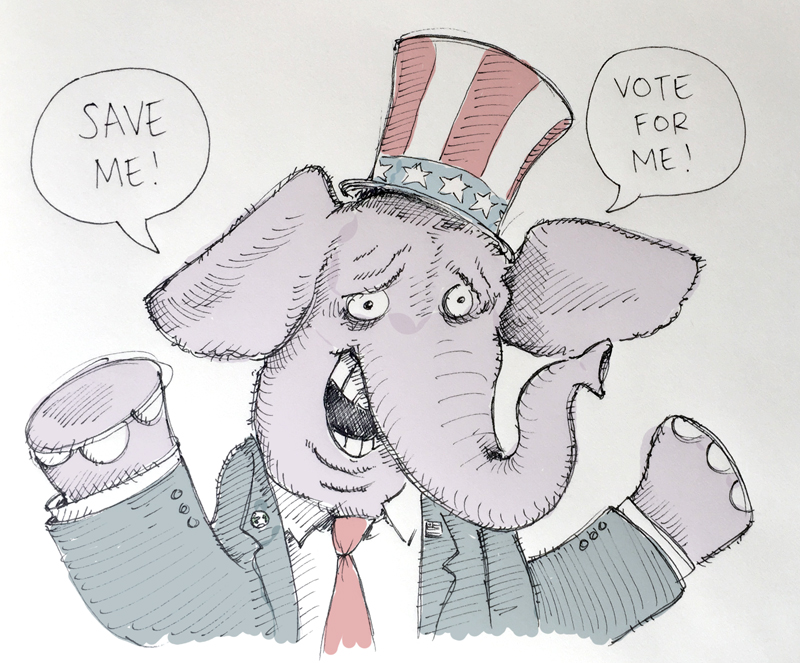 There’s no arguing that the 2016 presidential campaign has been somewhat of a spectator sport. Without a doubt, the competition can be fierce, especially when it comes to campaigning for donor support. Some candidates have received tons of free media coverage, while others have poured millions into TV, radio, and online advertising. So what are nonprofits to do when aggressive political campaigns are vying for donor support?

The old school of thought is that political campaigns will steal donor support from charitable causes.

As we’ve seen from running successful, concurrent online donor acquisition programs for multiple clients, it’s not quite that easy for one campaign to monopolize the giving market. It’s also typical for the average donor to donate to three, even four, charities in a single year. Will 2016 be any different, and will political giving influence donors to change their charitable contributions? A survey by Dunham+Company suggests that political giving will have some impact on charitable giving but most people will not be affected (with 79% of donors saying they will give the same or more to charitable causes, despite the political campaigns in 2016).

Will donors’ wallets be worn after the election? Data on the 2012 presidential and federal office campaigns presented some interesting findings. Political giving does affect charitable giving. The data showed that political donors gave more to charities in 2012 than they did in 2011. The study also noted that people who did not donate to federal political campaigns in 2012 gave 2% less money to nonpolitical causes than they did in 2011. It challenges the trumped-up belief that presidential campaign fundraising decreases support for charitable organizations. It leads us to believe that nonprofits can actually benefit during presidential election years.

Are media networks prepared to handle increased demand this year?

Nonprofits needn’t worry. We spoke with some of the biggest publishers on the web, and they told us that nonprofits will feel little effect by the big events this year. Most networks are large enough to absorb the increased demand right before the election.

Broadcast TV will boast the lion’s share of ad dollars spent on political campaigns, but digital video is booming. Online video is becoming the new source of political information for donors as news networks are pumping out more content surrounding the election. Research suggests desktop-based video ads are the preferred digital format for political campaigns because of individual interest-based and behavioral targeting.

As Election Day approaches, advertisers and nonprofits alike can expect to see video placements in high demand, so it may be wise to avoid buying video inventory until campaigning cools off. The tighter the election becomes, the higher the bidding competition, especially in key states like Ohio, Florida and California. In 2015, Borrell Associates forecast that total US digital political ad spending would pass $1 billion this year, according to recent data.

Should nonprofits use caution or go the whole hog?

Nonprofits can expect to feel a little extra pinch near November – not as much from the candidates as from other nonprofit advertisers, which could drive rates up for high-demand publisher placements like major online retailers. As always, the bigger the budget, the more inventory there is to bid on, which in turn would have a better effect on any campaign performance.

As far as audience testing, do not limit campaigns with stringent targeting. Cast a wide net as the political season tends to saturate networks and publishers and drastically reduces available audience segments. Look into placements where political advertisements aren’t allowed, and have a guaranteed larger share of voice (SOV).

For nonprofits looking to acquire younger donors, this is the year to tap into a young and politically minded, yet giving, demographic. From 2011 to 2012, there was a 10.8% increase in charitable giving among political donors ages 25 to 34, according to a Blackbaud study. Surprisingly, the same study also discovered that those donors ages 45 to 64 were more active in giving to candidates than charities.

So what happens when the election is yesterday’s news?

There’s a lot to look forward to post election. Many consumer advertisers and nonprofits have their sights set on the virtual annual events like Cyber Monday and Giving Tuesday. By that time, political fundraising will be over and consumers will be in full holiday shopping and giving mode, with hopefully a few or more dollars to spare for their favorite causes.

Voting and giving go hand in hand. They are both ways for people to support who, and what, they believe in. The opportunity to fundraise, while the country is actively thinking about what they believe, is an ideal scenario. Just remember to thank your donors right away; 16% of donors say they will give more in 2016 to charities that treat them well after they’ve made a donation.