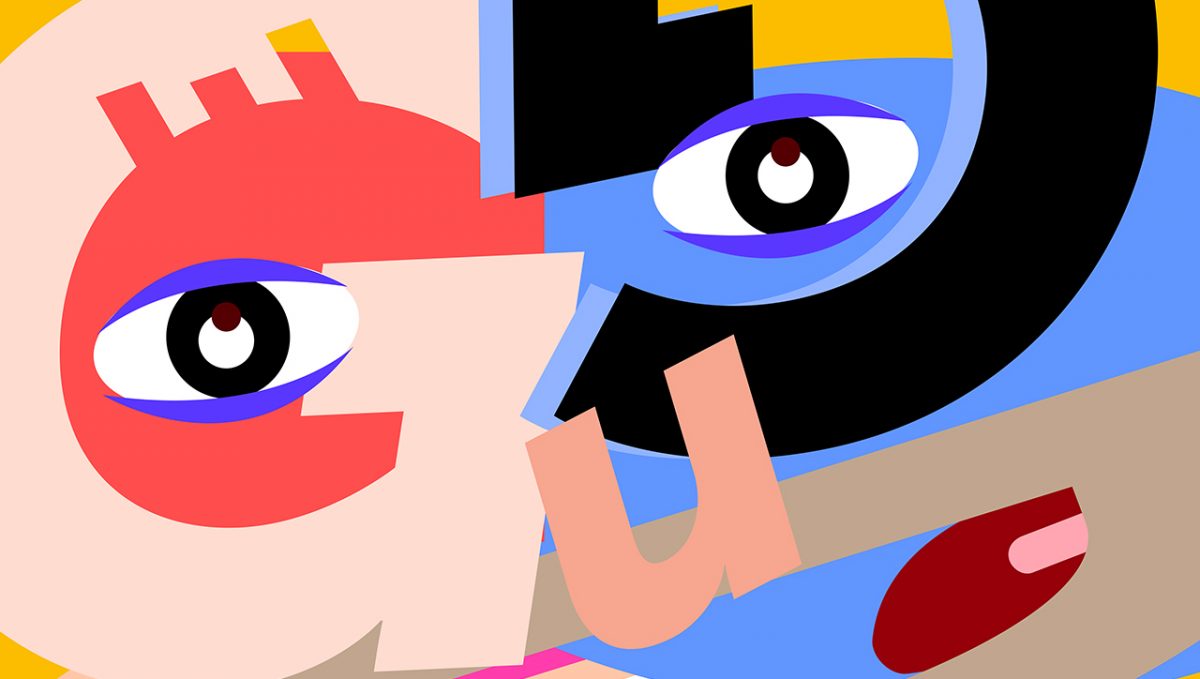 Call Them By Their Pronouns

Call Them By Their Pronouns

“How do we write when we’re speaking about a hypothetical individual but don’t want to default to a specific gender?” began the email from Tom, our Chief Creative Officer. Below that, he had pasted a block of text:

Regardless of campaign, what never changes is that our focus remains on the consumer first. What challenges does he/she face? What moves him/her to action? When and where is the best place to motivate him/her?”

“How should it read?” Tom asked. “It’s going to come up again and again. So we can be certain it matters.”

He’s right: The language people use to speak to and about others does matter. And as mass-media advertisers, our language has the power to reach all people. So it’s our responsibility to ensure our language reflects the diversity of all people. One way to do that is by challenging the assumptions we make when we default to words like “he” or “she.”

Tom’s “hypothetical individual” is what your grammar teacher would call an “indefinite subject.” English speakers have tried several ways to address indefinite subjects throughout history. According to Merriam-Webster, 18th-century grammarians defaulted to “he/him/his” pronouns for indefinite subjects, giving us phrases like “Everyone should do his best.”

In response, the next wave of grammarians opted for referring to indefinite subjects as “he/she.” This construction is balanced, at least, but becomes clunky in compound sentences (as Tom’s example shows). More problematic, this dichotomy of pronouns excludes nonbinary people: individuals who don’t identify as solely male or female.

Why “they” is here to stay

Singular “they” is the elegant solution to both problems. “They” and its counterparts “them” and “their” are gender-neutral pronouns, which refer to a subject without associating a gender. That means “they” is better suited for indefinite subjects than either “he” or “he/she,” because it is inclusive of all possible genders, whether the subject identifies as binary (either male or female) or nonbinary.

If you’re hearing about singular “they” for the first time here, this one-set-of-pronouns-fits-all solution may seem counterintuitive. But singular “they” has usage dating back to the 1300s, according to Merriam-Webster, which notes instances in works by Shakespeare, Austen, Thackeray and Shaw. Nonbinary people themselves have also existed throughout history, employing “they” and a variety of other pronouns and titles in cultures around the world. 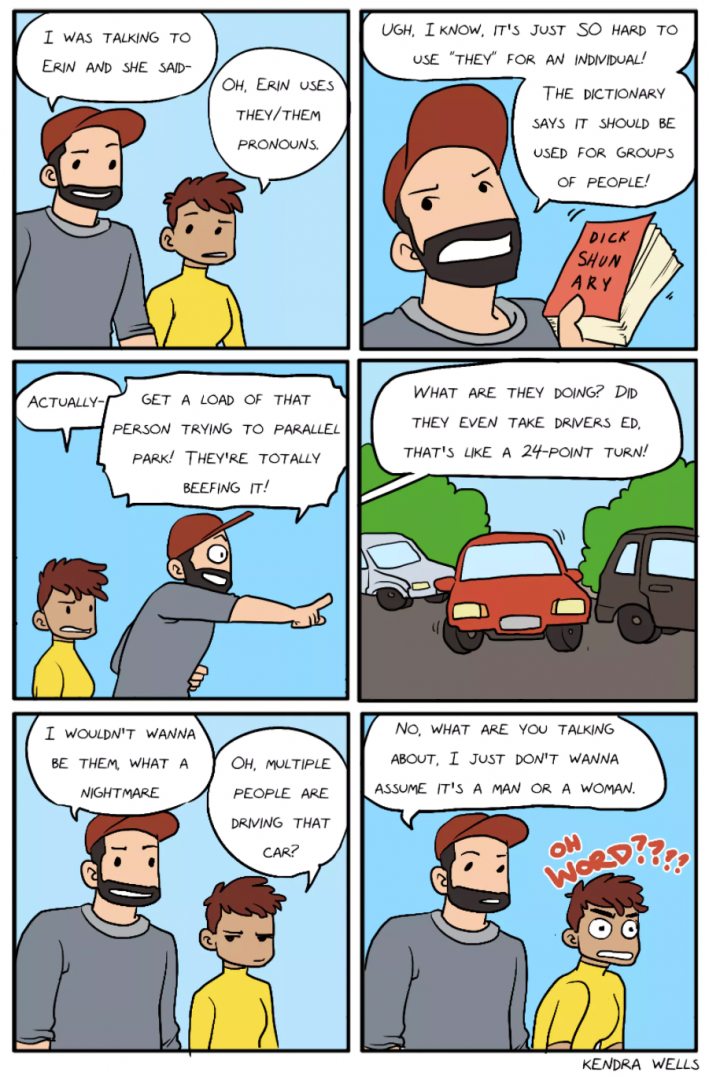 Pronoun Panic by Kendra Wells as seen on The Nib

Many, though not all, nonbinary folks use gender-neutral pronouns to affirm their identity and communicate it to others. “They/them/their” is the most commonly preferred set of gender-neutral pronouns among nonbinary English speakers, though lesser-known alternatives like “ze/hir/hirs” and “xe/xem/xyrs” are also gaining popularity. The only way to know with certainty which pronouns a person—nonbinary or binary—prefers is to ask them. 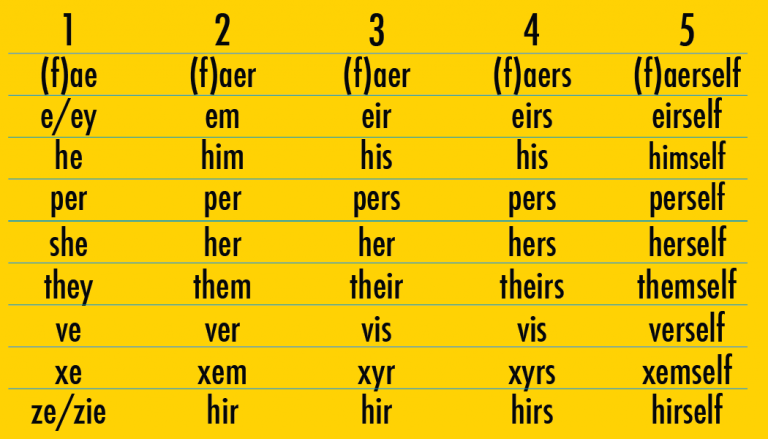 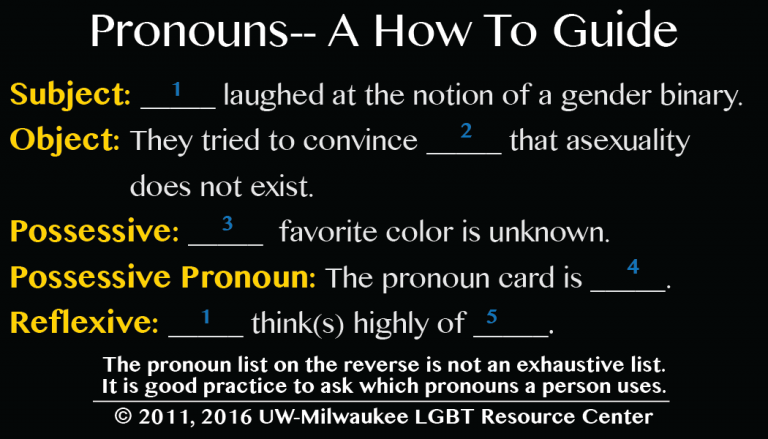 Advertisers have ignored nonbinary audiences for too long, in small part because of discomfort with gender-neutral language. So when Coca-Cola addressed nonbinary individuals in its 2018 Super Bowl spot, the moment felt like a milestone.

“There’s a Coke for he, and she, and her, and me, and them,” goes the voiceover, read by a succession of distinct voices. At the sound of each pronoun, the camera pauses on a single subject, ending on “them,” a young person with short hair and a rainbow-collared jacket. The moment passed so quickly, many may have missed it. But for those who felt seen for the first time by a big brand, the line made a lasting impact.

Yes, I did start to cry when a Coke commercial used the singular they, in case you wondered if representation matters

While established brands like Coke are beginning to add nonbinary audiences to their marketing plans, some up-and-coming brands are making nonbinary inclusion part of their foundation. Take them, Condé Nast’s newest editorial property, for instance. On multiple platforms, them shares stories on current events and pop culture through an LGBTQ lens, and encourages followers to use #oneofthem.

If you’re unsure how to begin using gender-neutral language in your ads, consider taking a cue from TomboyX. The all-gender underwear brand engages gender nonconforming people as brand ambassadors, often through sponsored ad-reads on podcasts, like this one from nonbinary comedian Rhea Butcher:

When Tom sent the email asking for gender-neutral language, we felt a little nervous answering his question on this blog. As an agency staffed primarily by gender-conforming folks, we don’t bring much firsthand expertise to the conversation about nonbinary pronouns. Thankfully, our expertise is in listening to others and amplifying their messages. For this blog post, that meant seeking out grammarians, like Emily Brewster of Merriam-Webster, and nonbinary writers like Jacob Tobia, Suzannah Weiss, Meredith Talusan and many others. By listening to them, we learned that when advertisers take small steps to make our messages more inclusive, it can have profound effects on our audiences. Listening like that is a practice and it starts with asking the right questions:

Regardless of campaign, what never changes is that our focus remains on the consumer first. What challenges do they face? What moves them to action? When and where is the best place to motivate them?”